Temple Pulls Away From East Carolina, 66-57 | Beaufort County Now | East Carolina faltered down the stretch Wednesday night as Temple broke open a tight game in the fourth quarter on the way to a 66-57 American Athletic Conference victory inside Williams Arena at Minges Coliseum.

Temple Pulls Away From East Carolina, 66-57 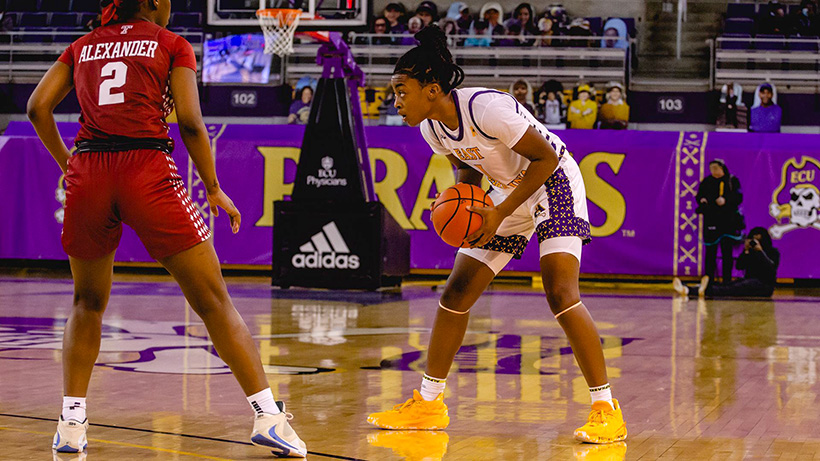 GREENVILLE, N.C.     East Carolina faltered down the stretch Wednesday night as Temple broke open a tight game in the fourth quarter on the way to a 66-57 American Athletic Conference victory inside Williams Arena at Minges Coliseum.

The Pirates (5-5, 3-2 AAC) have lost their last two league games after beginning the conference season at 3-0. The Owls (3-3, 3-0 AAC) remained unbeaten in AAC play and won their third-straight decision.

"Hats off to Temple," head coach Kim McNeill said. "They came in here from the jump and wanted it more than we did. They're a tough, hard-nosed team with two really good post players.

"There's not a lot of good I can say about our performance tonight. I'm disappointed in the way we played from the start. Even when we went on that run in the second quarter, we weren't playing our brand of basketball. We've lost our focus. We're a defensive-minded team yet, in the last three games, we've not pushed our opponents over 16 turnovers and that's not who we are. We've got to be able to put it together on both ends of the floor."

Lashonda Monk scored a team-best 17 points while Taniyah Thompson finished with 12 points and six rebounds. Ryann Evans finished the night with a season-high and squad-leading seven boards (three offensive). Alexa Williamson netted a game-best 19 points for Temple to complement a double-double of 17 points and 11 rebounds out of AAC Co-Preseason Player of the Year Mia Davis.

ECU was unable to find its shot in the second half, hitting just seven of 32 from the field, while ending up at 33.3 percent (21 of 63) for the evening. Conversely, the Owls converted 11 of 26 in the final 20 minutes and shot the ball at a 41.7-percent (25 of 60) clip overall. Temple won the rebounding battle 43-37 while also recording more assists (20-12) and steals (9-8). East Carolina hit a season-high nine three-point field goals, including four by Monk.

Turnovers plagued the Pirates in the first five minutes, allowing the Owls to get out in transition and score some easy buckets to build a 10-5 lead. Temple extended the upper hand to 18-9 following a driving layup by Tasha Clinton with 2:21 remaining on the clock, but Moore dropped in a pull-up jumper and Thompson hit a three to slice the Owls' advantage to 18-14 entering the second stanza.

The visitors pulled ahead by 10 at 24-14 under a minute into the second period after a Emani Mayo three-pointer, but East Carolina began to chip away at the deficit. Gee got hot from deep, nailing a pair of three-point field goals as part of a 14-3 run that propelled the Pirates to a 28-27 lead with 5:21 on the clock. ECU kept it going from three-point land as Monk popped in another deep shot to push the Pirates ahead 31-27. However, Temple responded with a triple of its own to pull within one. Davis looked to give the Owls the edge heading into halftime, scoring a layup with 17 ticks left that put her team up by one at 34-33, but Monk threw up an attempt from NBA range that banked off the glass and in at the buzzer to afford East Carolina a two-point lead.

The Pirates drained seven triples out of 13 attempts in the first two quarters to help themselves out of the early hole. ECU also finished the half with a slight edge on the glass, pulling down 20 rebounds to Temple's 19. Thompson paced all scorers with 12 points while Davis netted nine points and secured five rebounds to lead the Owls.

Another three right off the bat in the third gave East Carolina a 39-34 advantage. Temple was able to rally, scoring 10 of the next 15 points to draw even at 44 with 4:10 to play in the quarter. The teams traded the upper hand back and forth before the Owls received a Alexander free throw to grab a 49-48 lead moving to the final stanza.

The Pirates went cold in the fourth, missing their first nine shots from the floor before Monk drove in for a layup with just 2:08 remaining. Temple would build as much as a 13-point advantage in the frame which would be too much for ECU to overcome.

Up Next: East Carolina hits the road Saturday for an American Conference contest at Wichita State. Tipoff at Koch Arena is scheduled for 3 p.m.
Go Back