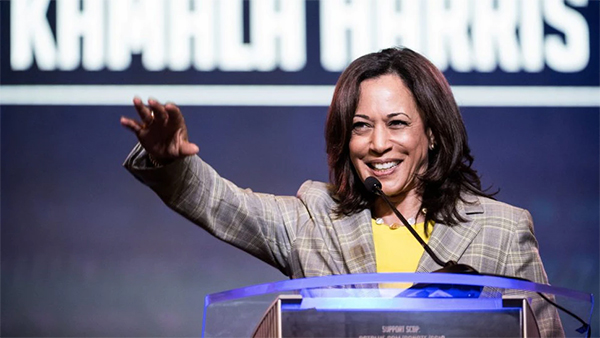 President Joe Biden is receiving intense criticism after tapping Vice President Kamala Harris to manage the border crisis, especially after her controversial past remarks about immigration and the message her appointment sends to those crossing the border illegally.

“She’s leading the effort because I think it’s important to put someone who, when he or she speaks, they don’t have to wonder about where the president is,” Biden said. “When she speaks, she speaks for me. She doesn’t have to check with me.

In November 2018, Harris compared U.S. Immigration and Customs Enforcement (ICE) officers and members of the Ku Klux Klan (KKK), suggesting that they were terrorists.

During a June 2019 Democrat presidential debate, Harris raised her hand in support of decriminalizing illegal border crossings into the U.S.

Later, when confronted during an interview on ABC’s “The View,” Harris doubled down on her position of decriminalizing illegal border crossings, saying, “I am in favor of saying that we’re not going to treat people who are undocumented that cross the border as criminals, that’s correct.”

Harris also raised her hand in support of giving illegal aliens health care when she was asked during a Democrat presidential debate: “Raise your hand if your government plan would provide [healthcare] coverage for undocumented immigrants?”

When asked by CNN’s Jake Tapper if she believed that everyone who is “in this country illegally” is entitled to healthcare benefits, Harris responded, “Let me just be very clear about this. I am opposed to any policy that would deny in our country any human being from access to public safety, public education or public health, period.”

Harris has also referred to border security as “a distraction from the real issues” and suggested potentially scrapping ICE, saying, “We need to probably think about starting from scratch.”

Biden appointing Harris to respond to the border crisis elicited backlash from public officials, including Republican Arizona Gov. Doug Ducey, who said that Harris was “about the worst possible choice that one could make” to be “in charge of border security.”

“In no point in her career has she given any indication that she considers the border a problem or a serious threat,” Ducey said.

Looks like DHS Secretary Mayorkas is being pushed aside and that “VP Harris will be leading the administration’s efforts at the southern border” – and since she’s the new point person at the border, the American people deserve to know where she stands on several things…

Is this a crisis?

This morning, VP Harris regarded the situation at the southern border as a “huge problem” but did not acknowledge the fact that it is a humanitarian, national security, and public health crisis.

In June 2019, then Candidates Joe Biden and Kamala Harris raised their hand when asked: “Raise your hand if your government plan would provide [health care] coverage for undocumented immigrants?”

The Biden administration continuously claims that it is using Title 42 (the important public-health tool implemented to prevent the spread of COVID). Earlier this week, despite evidence to the contrary, WH Press Secretary Jen Psaki claimed that “families and single adults are being expelled under Title 42 and should not attempt to cross illegally.”

But on April 7, 2020, then-Senator Harris signed on to a letter to Secretary Chad Wolf calling Title 42 an “unprecedented expansion of executive power” that had “no known precedent or clear legal rationale.”

Does VP Harris still agree with her interpretation from less than a year ago?

CNN reported this week: “As of Tuesday morning, around 4,800 unaccompanied minors were in CBP custody, according to the official, down just slightly from the number in custody Monday. Of the 4,800, more than 3,300 — or around 70% — were in custody longer than the 72-hour legal limit, the official added.”

In 2018, then-Senator Harris said that CBP holding illegal immigrant children longer than 72 hours was “inhumane.” Does she agree with her previous assessment?

Reducing the number of illegal immigrant detention beds by 50%

In 2018, then-Senator Kamala Harris introduced the DONE Act, which would reduce the number of illegal immigrant detention beds by 50%.

Does she stand by the legislation she introduced less than three years ago?

In 2018, then-Senator Harris asked the acting director of Immigration and Customs Enforcement (ICE), whether he “saw any parallels” between the KKK and ICE. Would she stand by those same comments today?