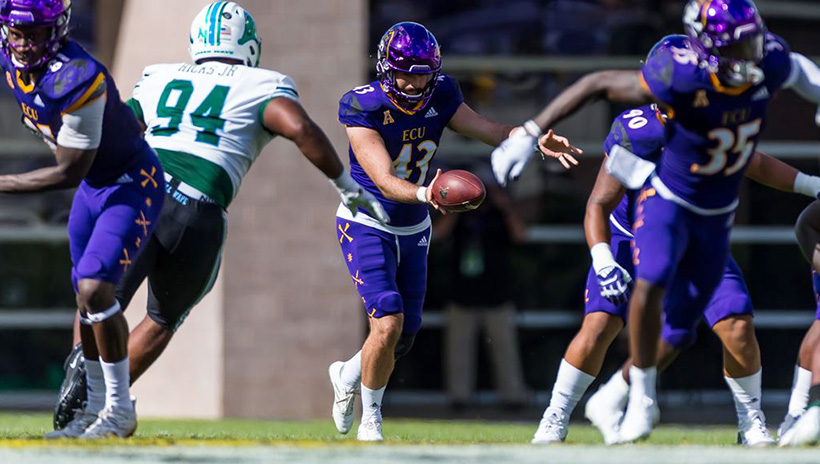 AUGUSTA, Ga.     East Carolina senior punter Jonn Young is one of 51 players named to the 2021 Ray Guy Award Watch List according to an announcement by the Augusta Sports Council Wednesday. Young is the first Pirate to be named to the watch list since Worth Gregory in 2016.

The Ray Guy Award is presented annually to the nation's best collegiate punter.

Young, who has served as ECU's starting punter the last three seasons (2018-20), currently ranks among the program's Top 10 in career average with a 40.8 clip. He has played in 33 games with the Pirates since transferring from West Virginia, recording 159 punts for 6,484 yards and placing 38 inside the 20-yard line. Young turned in his best single-season average in 2020 (41.8 ypp) while also serving as the team's top holder for record-setting (single-season, career field goals) placekicker Jake Verity.

The number of eligible candidates for this season will grow when the award opens for nominations in August. The complete list of candidates will be released on November 2 before 10 semifinalists and three finalists are selected on November 10 and November 23, respectively. The winner will be announced live during The Home Depot College Football Awards airing on ESPN on Thursday, December 9.

Young and the Pirates will open the 2021 season in Charlotte when they square off against Appalachian State inside Bank of America Stadium Sept. 2. Kickoff is slated for 7:30 p.m. (ET) and will be aired on ESPNU.
Go Back