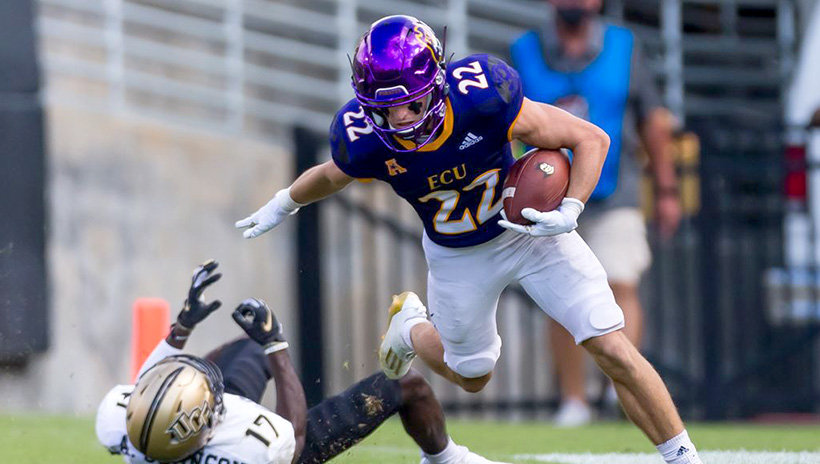 LOUISVILLE, Ky.     East Carolina sophomore wide receiver and return specialist Tyler Snead is one of 57 players named to the 2021 Paul Hornung Award Watch List, according to an announcement by the Louisville Sports Commission Thursday.

Snead, who earned Second-Team All-American Athletic Conference honors as a receiver and return specialist in 2020, led the team in receptions (53), punt returns and yards (12 for 144), kickoff returns and yards (18 for 409) and all-purpose yards 1,145. He reached the endzone seven times and threw for a score in the season finale against SMU.

The Raleigh, N.C. native authored a pair of 100-yard receiving games (105/Georgia State, 108/Tulsa) and topped 100-plus all-purpose yards four times, including 231 at Georgia State and 244 at Temple. Snead's lone special teams touchdown came during the second quarter against the Owls when he returned his second career kickoff 95 yards, earning him AAC Special Teams Player-of-the-Week accolades.

A 2021 Preseason All-America pick (fourth-team) by Phil Steele's College Football Preview Magazine and an All-AAC selection by both Athlon Sports and Phil Steele, Snead has caught 134 career passes for 1,519 yards (11.3 ypc) with 14 touchdowns. He has added 95 yards on the ground with one score and has a combined 1,069 return yards with a pair of kickoff return touchdowns in 25 career games (19 starts).

The Paul Hornung Award presented by Texas Roadhouse, now in its 12th season, is presented annually to the most versatile player in major college football by the Louisville Sports Commission. The LSC created the PHA to recognize the distinctive talents of student-athletes and help preserve the legacy of Paul Hornung - a man many consider the most versatile player in the history of college and professional football. Each year, the winner and his family are honored at a banquet presented by UofL at the Galt House Hotel in downtown Louisville, Ky.

The 2021 Watch List was compiled by a panel of college football experts based on a combination of 2020 statistics, career performance, sports information director recommendations and expectations heading into the 2021 season. Players may be added to the watch list during the regular season based on performance.
Go Back