How to identify the New Racism – Critical Race Theory 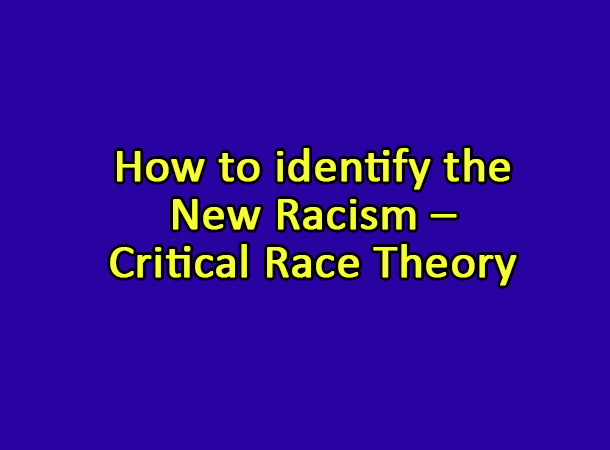 Dr. Martin Luther King's grand vision of a colorblind society where people would be   “judged on the content of their character, not the color of their skin” is under sustained attack by a new breed of race hustlers promoting so-called “Critical Race Theory” or CRT.  The neo-racist CRT would make everything about race, judging people of the color of their skin, not the content of their character, the exact reverse of what Dr. King so valiantly fought for.

CRT is part of the Marxist doctrine of Critical Theory, developed by German communist ideologue and professor Herbert Marcuse.  It was refined by a group of American Marxist law professors who created the CRT variant, and takes the usual Marxist approach of trying to divide society between “oppressors” and “victims” and pit them against each other.

To understand what to look for to identify CRT, one has to think in terms of Newspeak as defined by George Orwell in his classical novel of a dystopian society, “1984”.  Newspeak takes common words and redefines them to mean the opposite of their original meaning.  CRT is riddled with Newspeak.

CRT advocates claim to be “anti-racist” which on the surface would seem to be a good thing.  However, their version of “anti-racism” is, in fact, racist itself.  CRT divides society into favored groups and disfavored groups, instead of treating everyone equally.  Disfavored groups would include whites, Christians, Jews, males, straights, and in many cases Asians.  A good example of this bizarre definition of “anti-racism” came at a recent UN sponsored “Anti-racism” conference when the Foreign Minister of Iran gave a speech in which he called for the “total eradication” of the Jews, and to make matters worse no one at the conference objected to that statement.  This is what passes for “anti-racism” these days.

Two related common CRT terms are “diversity” and “inclusion” or “inclusiveness”.  As most of us would define those terms, a policy of including everybody would certainly appear to be a good thing.  However, Newspeak strikes again, and the CRT advocates have their own definitions, which amount to only including their own favored groups.  A good example of how this term is being abused these days comes from a French-speaking school district in Ontario, Canada.  School administrators removed 4,700 books from school libraries and conducted a book burning.  They videotaped it and provided copies to students, saying it was an example of “inclusiveness” and urged students to conduct their own book burnings.

There are quite a few other terms that are trademarks of CRT including “systemic racism”, “whiteness”, “social justice”, “environmental justice” and “white privilege”.  All of the CRT buzzwords listed here show that CRT is present even if those presenting these concepts claim that “it is not CRT”.  Parents, school administrators and school board members need to keep a close eye on what is going on in the schools and what is being presented to their children.