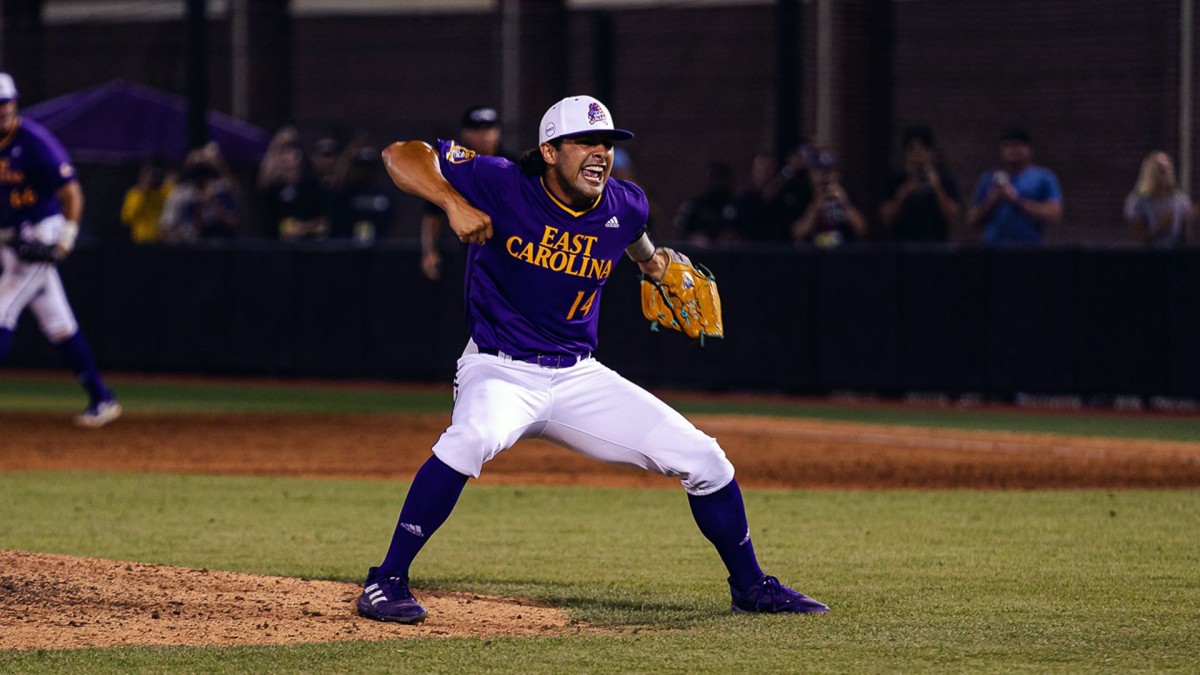 GREENVILLE, N.C.     In front of a record crowd of 5,603 fans, No. 8 National Seed East Carolina won its program and American Athletic Conference-best 20th consecutive game in a 4-2 victory over Virginia Saturday night at Lewis Field inside Clark-LeClair Stadium. With the win, the Pirates (44-18) advance to the 2022 Greenville Regional Final Sunday night taking on the winner of Virginia (39-18) and Coastal Carolina (37-19-1) at 6 p.m. (ET).

Josh Moylan's no-doubt two-run home run in the second inning staked ECU to an early 2-0 lead setting the tone for the hard fought contest. With one away and Ben Newton standing on first base, Moylan took a first pitch fast ball from Brian Gursky to right field for his sixth round tripper of the season.

C.J. Mayhue (5-1) earned the win allowing one run (earned) on three hits with a pair of strikeouts over five full innings. Zach Agnos notched his second save of the season giving up a walk and fanning a pair in two-thirds of an inning. Garrett Saylor gave up a run (earned) on a walk with two punch outs in 1.1 innings of relief, while Carter Spivey tossed two scoreless frames on three hits with two strikeouts.

In the fifth frame, Virginia finally got on the board thanks to Chris Newell's 12th home run of the year, a solo shot to right-center, cutting the lead in half at 2-1.

The Pirates' answered with one a run in the home half of the fifth thanks to Justin Wilcoxen's solo blast to right-center making it a 3-1 ball game.

Both teams traded runs in the seventh capping the scoring at 4-2. Ethan Anderson plated the run for Virginia on a ground out to second scoring Kyle Teel, who walked with one out and moved to third on Casey Sauke's double down the right field line.

Once again ECU responded playing a little small ball in the home half of the seventh. Alec Makarewicz began the stanza with a walk, took second on a passed ball and moved to third thanks Ryder Giles' pinch-hit sac bunt. Agnos scored Makarewicz on his long fly out to center pushing the lead back to two, 4-2.

In the top of the ninth and with one away and two on, Anderson drew a bases loaded walk before Agnos retired both Newell and Max Cotier on strikeouts (swinging) securing the Pirates third-straight Greenville Regional Final appearance (2019, 2021-22).

Offensively the Pirates tallied six hits getting one each from Lane Hoover, Makarewicz, Moylan, Newton, Jacob Starling and Wilcoxen.
Go Back