NC ranks 48th in the nation in getting Covid vaccines out 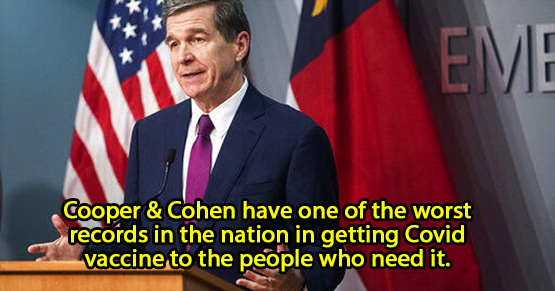 FreedomFirstDaily.com is reporting:  There is a cliched definition of insanity, often attributed to Albert Einstein, of doing the same things, over and over, while expecting different results.

After months of shaming and micromanaging North Carolinians via Pandemic Panic, you’d think the Cooper administration would have moved heaven and earth to make the vaccine as accessible and expedient as possible. Instead, the used the same, demonstrably flawed plans that have failed the people of North Carolina before, and expected different results.

Senate Leader Phil Berger (R-Rockingham) points out the hugely consequential error in a post on his Facebook page:

“That’s unacceptable, and to me it seems like a big part of the problem is the reliance on counties to come up with their own individual plans.
A major reason for the failed hurricane recovery efforts was the decision to rely on county governments to handle the bulk of the work. The head of emergency management for the Cooper Administration said just a few months before the pandemic began, “We have learned from experience that many local governments lack the staff expertise and capacity to administer [disaster relief].”
But despite that experience, the Cooper Administration decided to rely on that same model for vaccine distribution. We now have 100 different distribution plans with 100 different methods of signing up to be vaccinated. That has to change, and quick.”
Governor Roy Cooper; a walking case study in insanity?