Economic Rorschach Test | Beaufort County Now | In psychology, a Rorschach test is one in which the patient is presented with a series of inkblot images

In psychology, a Rorschach test is one in which the patient is presented with a series of inkblot images, and how the patients perceive the images helps inform the psychologist about the patients' personality characteristics and emotional functioning.

Similarly, a chart accompanying a recent NC Justice Center article serves as a test of one's economic and ideological perspective. The chart shows the North Carolina state budget as a share of the state's personal income over the past 45 years. The dotted line shows the 45 year average.

Per the chart, since 2009, the state budget has consistently been below the 45 year average, and appears to be falling. Depending on one's perspective, however, this same chart can mean very different things. When you look at this chart, what do you see? 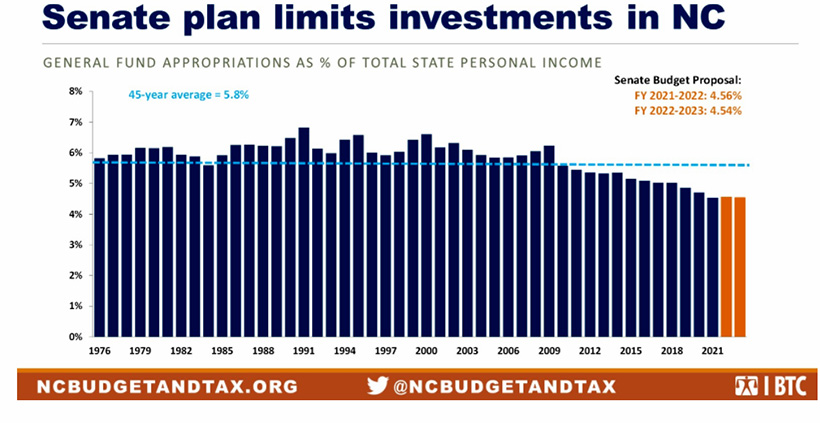 To the far-left Justice Center, this trend represents "missed opportunities" to make "investments" to "address the needs of North Carolinians." To them, a state budget that consumes a smaller share of the state's economy is a bad thing. They believe that the political class should be in charge of spending more of your money and controlling more of the economy's scarce resources.

But to supporters of a free market and economic growth, this chart represents something positive. Government fiscal restraint resulting in the economy growing at a faster rate than the state budget represents a good thing. Allowing people to keep more of their money, putting the people in control of more of the economy's scarce resources, and the resulting economic growth that benefits those on the margins of employment are worthy of praise.
Go Back